The term PUT is being used here to describe combining two discrete transistors to emulate a unijunction transistor.

Shown below is the typical PUT oscillator. Increasing the resistors R1 and R2 in an attempt to reduce the power usage stops oscillation. 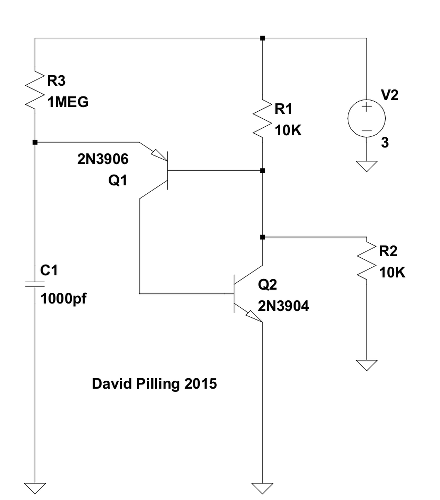 This phase gives the characteristic very sharp drop in voltage.

By reducing the value of R1 the return of the voltage at the collector of Q2 to the value set by R1 and R2 is made faster.

Low current circuit
This is a version which when built used 1 μA; Q2 and Q3 are a current mirror.

If I touch the input of my 'scope with my finger it shows a 50 Hz wave with amplitude 11 V pp. This is the common "mains hum" phenomena. Removing the power supply from the circuit and touching the positive rail, supplies enough power from this source to make it oscillate. 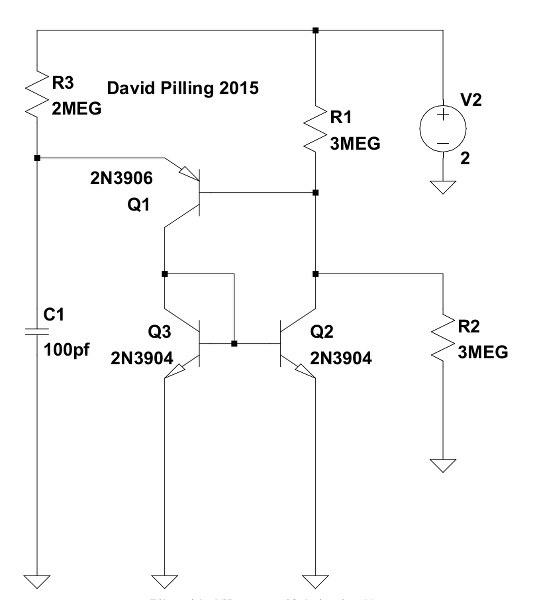 For the low current version to work various conditions have to be met.

and the state will not be stable. However all that is necessary is for a reduction in current through Q3 to give a reduction in current through Q2; which means the circuit will work with values that don't meet the above condition. But if R1 is too big relative to R3 the circuit will not leave the conducting state. This does echo the problem with the original PUT oscillator but ratio of the resistors can be much smaller; because the gain of a transistor is replaced with the gain of the current mirror which is unity. See PUT part 2 for a configuration that allows R3 to be much less than R1.

Another version of this circuit with a period of over two hours and current consumption of 0.2 μA can be used to trigger a micro-controller, see Waking from sleep mode.

Square wave oscillator
This reference shows how to use two unijunction transistors to produce a square wave
Getting to Know the UJT April 1970 Popular Electronics By Frank H. Tooker

The turn off mechanism is different to the usual PUT circuit, it does not rely on the NPN transistor not being saturated, the result is that this circuit can be used with high value resistors. Click to see large image.

The configuration works better at low currents with the current mirror version of the PUT. The one shown uses around 1 μA and produces a somewhat square wave output. Click to see large image.

I found another way to generate a square wave in "Handbook of Semiconductor Circuits" (published originally as "Military Standardization Handbook, Selected Semiconductor Circuits, MIL-HDBK-215" in 1960). This uses an extra diode to increase the time the capacitor takes to discharge. Whilst C1 is charging, things go as in the standard circuit at the top of this page; once Q1 turns on, the diode D1 is reverse biased and C1 cannot discharge (quickly) through Q1, instead it discharges (slowly) through R4.